The old stone bridge built over the Fontanka in 1780 became, in time, too narrow to handle the increasing volume of traffic along Nevsky Prospekt.

It was rebuilt, accordingly, in 1841, after the project of T. Butatz, the entire job being completed in six months – a record time for those days. The Anichkov Bridge consists of three arched masonry spans. Its moulded cast-iron railing with a design composed of mermaids and sea-horses was copied from the Palace Bridge in Berlin, built in the 1820s by K. Schinkel. 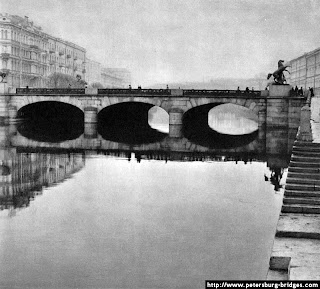 The four Horse Tamers groups adorning the bridge were modelled and cast in bronze by P. Klodt, the celebrated Russian sculptor; they brought the bridge fully merited renown. Initially, at the time of reconstruction, only two bronze groups were erected on the west-end abutments, while the abutments at the other end were embellished with their plaster copies. A year later Klodt cast the two groups in bronze; but they were presented as a gift to the King of Prussia and dispatched to Berlin. 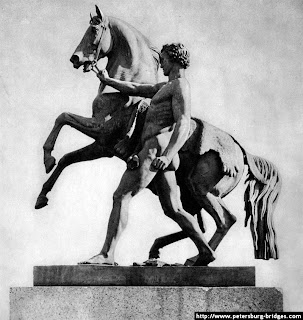 Another pair of bronze castings was made, but they, too, remained in place for no more than two years and were sent off, in 1846, as a gift to the King of Naples, while a new pair of plaster copies was set up on the east-end abutments. 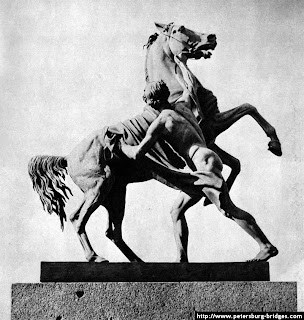 Finally Klodt decided to create two entirely new sculptured groups, differing in composition but treating the same theme; and in 1849-50 these were cast in bronze and set up at the east end of the bridge. 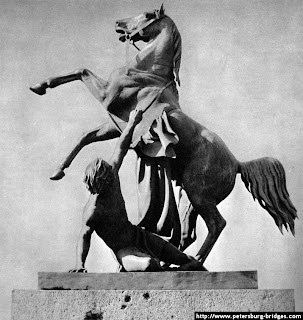 These sculptured groups depicting untamed steeds and their trainers are an allegory of Man’s triumph over the forces of nature. The history of world art offers few works in which the theme of Man’s victorious struggle is presented so forcefully and convincingly. 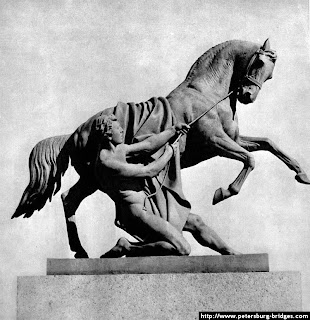 In addition to the impact of their profound message, so consonant with our epoch, the sculptures are a source of high aesthetic enjoyment precisely because the sculptor has embodied his idea in forms of such artistic perfection. His talent has breathed life into the cold bronze and created a stirring Poem of Mankind.

The Hermitage's magnificent collection of European porcelain comprises several thousand items. The main part, eighteenth century porcelain, is displayed in room 271, the former church of the Winter Palace, decorated by Stasov after the fire of 1837 in the style of Rastrelli.