A few hundred metres downstream from the Liteiny Bridge the Bolshaya Nevka, the Neva’s longest northern effluent, forks off to the right.

Here, within some hundred metres from the Neva, the cruiser Aurora is moored forever at the quay wall, while just beyond it the Sampsonievski Bridge, built between 1954 and 1956 to replace the old nineteenth century wooden span, links the two banks of the Bolshaya Nevka. V. Demchenko and L. Noskov, who designed the bridge, sought to give it the traditional contours of the bridges of St. Petersburg’s older districts. The five central spans of the seven-span Sampsonievski Bridge, with the movable span in the middle, deliberately repeat the construction of the Kamenno-Ostrovsky and Ushakov bridges, both of which had been completed a year earlier. The Sampsonievski Bridge has some interesting architectural features, but its spans seem too narrow when compared with the width of the river at this point. 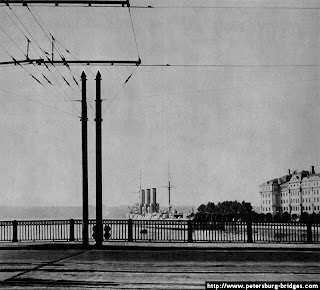 A distinct achievement of St. Petersburg’s civil engineers and architects is the new Birzhevoj Bridge spanning the Malaya Neva (the right-hand branch of the Neva) between Vasilyevsky Island and the Petrograd Side, completed in 1960. The project had been a particularly difficult and responsible assignment in civil engineering, for the new bridge replacing the old timber structure had to fit into the architectural landscape of the Vasilyevsky Island Spit, which has largely retained its original aspect. The smoothly rounded point of the island (the so-called Spit) splits the Neva into two branches of approximately equal width: the Bolshaya Neva and Malaya Neva. This circumstance accounts for the strictly symmetrical lay-out chosen for this part of the island by the early nineteenth century Russian architects. On the suggestion of A. Zakharov, one of the architects concerned, the monumental building of the former Stock Exchange (now housing the Central Naval Museum), built by Thomas de Thomon, was aligned strictly with the axis of the Spit. Two rostral columns were erected on either side of a semicircular square; and two evenly graduated ramps led down to the water. Developing the principle of strict symmetry that governed the architectural planning of the area, I. Luchini erected, in the late 1820s, two similar warehouses, one on each side of the Stock Exchange, and a custom-house (now the Institute of Russian Literature) north of it, whose dome seen in the skyline corresponds to the tower of Peter I’s Kunstkammer. The austere monumentality of the architectural whole harmonized perfectly with the fine balance of the individual edifices. It was this principle that determined the architectural aspect of the Birzhevoj Bridge. 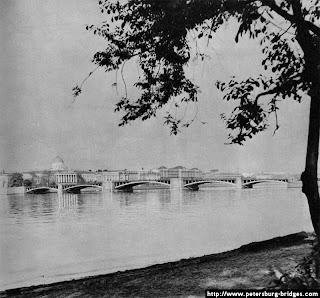 The left-hand branch of the Neva is crossed at the Spit by the five-span metal Palace Bridge; hence the decision that the Builders’ Bridge, too, should be a five-span metal structure with a contour generally similar to that of the Palace Bridge. However, its engineers (V. Demchenko and B. Levin) and architects (L. Noskov and P. Areshev) decided in favour of improved, more modern structural elements, and used steel arches. The length of the spans increases gradually towards midstream, as in the case of the Palace Bridge; here, too, the central span is the movable one. Constructed in such a way that it is nearly indistinguishable from the other arches when closed, it does not break the rhythmic lines of the bridge. The Birzhevoj Bridge fits perfectly into the architectural landscape of the Spit and the broad sweep of the Neva.

In November, 1965, five years after the completion of the Birzhevoj Bridge, a second major bridge spanning the Malaya Neva was built. This was the Tuchkov Bridge, which received its name from that of a leading lumber dealer, owner, in the eighteenth century, of a large timber-yard, who had financed, back in 1758, the building of the first wooden span on the same spot. Incidentally, if its name dates back to times past, the bridge itself offers an example of the employment of quite modern engineering techniques. The movable central span comprises two upward-swinging steel bascules. The two side spans measuring seventy-four metres each are bridged by prestressed ferro-concrete structures. Their originality and economy facilitated construction while the graceful lines of the unusually slender girders set off the massive granite piers, convincingly demonstrating the great strength of reinforced concrete. Designed by the authors of the Birzhevoj Bridge, V. Demchenko, B. Levin, L. Noskov and P. Areshev, the Tuchkov Bridge is rightfully considered to be one of St.Petersburg’s handsomest. It is an outstanding example of the modern trend in bridge architecture, which emphasizes austerity and elegance of contour and calls for a new approach to designing problems. The long spans of the bridge together with its simple and clear-cut lines harmonize well with the expanse of the river, striking a new and modern note in the panorama of the Neva’s embankments. 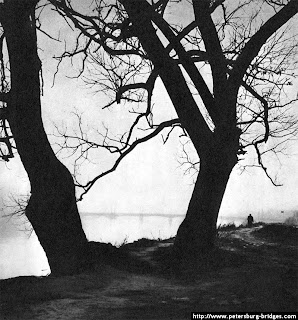 A different tonality, if one may say so, has been given the series of bridges and quays of the Karpovka, a distributary that separates the main part of the Petrograd Side from Aptekarsky Island, its northern fringe. These bridges are on a more modest, more intimate scale, in keeping with the modest width of the Karpovka and its picturesque meanders. At first only timber bridges spanned the Karpovka. The first bridge of reinforced concrete, given the name of Pioneers’ Bridge, was built over it in 1936. This is a handsome arched span, elliptical in shape, faced with granite; the selection of so impressive a finish was dictated by the location of the bridge on Kirovsky Prospekt, the main thoroughfare of the Petrograd Side.

In the 1960s work was begun on a granite facing for the Karpovka’s embankments. Its new quays have a graceful railing with a pattern which, though quite original, is nevertheless reminiscent of St. Petersburg’s old canals. Concurrently with the work on its embankrtients the Karpovka’s bridges were reconstructed. The graceful contours of these new bridges, built chiefly of the standard sectional ferro-concrete structures suggested by “Lengiproinzhproekt”, fit nicely into the Karpovka’s architectural surroundings. The northern reaches of the Neva delta comprise three large islands, namely, Stone Island, Yelagin Island and Krestovsky Island. The area is largely given over to spacious parks.

Here the Neva breaks up into several rather wide subsidiary streams, i. e. the Bolshaya, Malaya and Sredniaya Nevkas and the Krestovka; and into many nameless narrow creeks that criss-cross the islands to link the inland ponds. There is water and greenery wherever one turns, which makes this part of the city particularly picturesque. At present these northern islands of the Neva delta are the realm of recreation and sports. 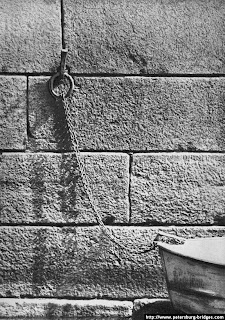 Bridges, too, are particularly numerous in this region of St. Petersburg. The great majority are relatively small timber footbridges, though there are also a few city-type spans of steel and reinforced concrete. The year 1955 saw the completion of an original pair of bridges at the eastern tip of Stone Island (Kamenny Ostrov), designed by V. Demchenko, B. Levin, P. Areshev and V. Vasilkovsky. These are the five-span metal Kamenno-Ostrovsky Bridge with a movable central span, which links the banks of the Malaya Nevka; and the Ushakov Bridge, named in memory of the famous eighteenth century Russian admiral, which spans the Bolshaya Nevka. The latter is the longer of the two, and in the interests of structural unity the designers made its central five-span part an exact replica of the Kamenno-Ostrovsky Bridge, adding two granite-faced arched spans on either side.

In the early 1950s Soviet architects favoured classical forms; the architecture of the two bridges is an example of this trend. The designers of the Kamenno-Ostrovsky and Ushakov bridges were bent on following the architectural traditions of St. Petersburg’s bridge engineering of the early nineteenth century, and therefore designed the face of the steel girders in the shape of flattened arches. Both of the bridges at the tip of Stone Island present an integrated architectural composition, and their stylized exteriors show good taste. The serenely flowing lines of the bridges are consonant with the surrounding parkland scenery.

By the early 1960s, however, Soviet architects had rejected their stylized imitation of Classicism and had struck out determinedly on a quest of rfew forms that should reflect the characteristic properties of modern building materials and structures. Severity, simplicity and structural logic became the fundamental features of the contemporary sttyle in architecture. These features were reflected in the exteriors of many new ferro-concrete bridges built 6ver St. Petersburg’s canals in the past decade. One of the most interesting examples is the Malb-Krestovsky Bridge, designed and built by Yu. Yurkov and L. Noskov in 1962. It spans the Krestovka, a short creek separating Krestovsky Island from Stone Island. The severe simplicity of its architectural composition goes hand in hand with a kind of dynamic grace; it seems to have been stopped short in an impetuous leap; and there is, indeed, a sort of sportive air about it, quite in harmony with its setting of park and athletic grounds.

Bridges over the Neva

"And bridges spanned the waters' width..." When Pushkin wrote his immortal poem, The Bronze Horseman, those bridges in masonry, wrought-iron and cast-iron spanned as yet only the creeks and canals of the southern section of the Neva delta.