The art and culture of ancient towns on the northern Black sea coastlands (700 B.C.-3rd century A.D.)

In 1830 soldiers digging stone on the steppe near Kerch by chance came across, beneath the Kul-Oba burial-mound (Tartar “Hill of Ashes”), a grave dating from the fourth century B.C. containing many valuable objects, among them a large number of gold articles of Greek origin.

Underneath the mound in a stone vault three persons were buried,- a warrior of the aristocracy, possibly a Bosporan ruler, his wife and a slave weapon-bearer. A gold vase with the figures of Scythian warriors making camp on the steppe, a crescent-shaped neck ornament (grivnd) embellished with small figures of Scythian horsemen, a gold phial, weapons ornamented with gold, earrings, pendants, bracelets, plaques – all these were brought into the Hermitage and are kept in the Gold Room as part of the unique collection of ancient Greek jewellery. The remainder are in room 116, case 22.

The Bosporan kingdom, with its capital at Panticapaeum on the site of present-day Kerch (see rooms 115, 116 and the case labelled “Panticapaean Necropolis”), lay on both sides of the straits of Kerch – Bosporus Cimmerius. The population of this slave-owning state was made up of Greeks, who had founded colonies on the Black Sea coast as early as the sixth century B.C., and local tribes. The relics found on the territory of the Bosporan kingdom reflect the unusual mode of life which had developed there as a result of the interaction of local and Greek culture. The local tribes dwelt mainly on the steppes, maintaining close contact with the Greek inhabitants of the Bosporan towns. Significant in this respect are the fifth century tombs of the local “hellenized” ruling class from the “Seven Brothers” burial-mounds near the Kuban (room 116, case 12). The graves, in which according to local custom horses were buried along with the deceased, yielded many objects of Greek origin. Of an obviously Greek character is the grave of a woman discovered at the end of the last century on the Taman peninsula near ancient Phanagoria (room 115, case 16). Here, among other things, were unearthed some famous fancy-shaped vessels for keeping fragrant oil made by Greek craftsmen at the end of the fifth century B.C. The finest of these, in the form of a sphinx – a fabulous creature with the face of a woman, the body of a lion and the wings of a bird, has preserved its colours wonderfully. In the Bosporan kingdom, the population of which lived by agriculture and vine-growing, the cult of the goddess of fertility, Demeter, was particularly widespread. The Bolshaya Bliznitsa burial-mound on the Taman peninsula, where in stone vaults decorated with murals were buried priestesses of Demeter, became famous due to the truly incredible riches found there; one of the priestesses’ dresses alone was embellished with more than two thousand gold plaques. The gold crowns, earrings, bracelets and other exquisitely made decorative objects are kept in the Gold Room of the Hermitage, the remainder in room 116, case 30. From the ancient Bosporan graves were extracted silver and bronze utensils and excellent examples of Attic vases (rooms 116 and 177). A well preserved antique sarcophagus of cypress and boxwood, with carved designs and traces of blue and red paint, was found in one of the stone vaults of the Yuz-Oba mound near Kerch (room 117). Also of interest is a group of objects from a late royal tomb dating from the third century A.D. (room 116. case 32 and the Gold Room), in which of particular note are a gold mask, apparently representing the Bosporan ruler Rhescuporis, and a large silver dish, a gift to a Bosporan king from the Roman emperor Caracalla. At the end of the third and beginning of the fourth centuries, the Bosporan kingdom was destroyed by the Goths. 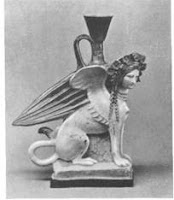 Room 120. Nymphaeum, 600 B.C.-3rd century A.D. The small Bosporan town of Nymphaeum, which traded with Athens in corn, was founded by inhabitants of the island of Samos in the sixth century B.C. on the site of a Scythian settlement. Excavations carried out by a Hermitage scientific expedition discovered dug-outs dating back to Scythian times with fragments of earthenware and the remains of grains of wheat and barley. Of great interest and importance was the discovery of a Greek shrine dedicated to the goddess Demeter. Many terra-cotta statuettes were found here, as well as goblets, rhytons, jugs of local and Attic origin brought by the natives of Nymphaeum as a gift to the gods, and some finely made terra-cotta acroteria and parts of a cornice. At the entrance to the shrine was a stone bearing the Greek inscription: Do not befoul the shrine.

Room 100 contains relics from Olbia (600 B.C.-3rd century A.D.) and from Chersonesus (500 B.C.- 4th century A.D.). Olbia, one of the colonies belonging to Miletus founded in the sixth century B.C. on the banks of the Bug estuary, was an important trading town which supplied Greece with corn.

Excavations led to the discovery of a fortress wall, the ruins of houses and temples, artisan quarters, potteries, wineries and bakeries. In Olbia there have been found relics of Greek writing (funeral and dedicative texts), works of art, Olbian bronze coins and various other articles.

The Tauric Chersonesus, three kilometres west of Sevastopol, was founded by Greeks in the fifth century B. C, and excavations have been carried out on the site of the ancient town from 1888 up to the present day. Displayed in the exhibition are ceramics, architectural details, coins, relics of writing and sculptures.

Italian culture, 700-100 B.C., was the basis upon which grew up the antique culture of the slave-owning society of Rome.

The exhibition consists basically of material obtained in recent years by Soviet scholars during archaeological research on ancient Slavonic settlements and burial-grounds, and on old Russian towns.