In the very distant past, on the territory of present-day Iraq, there developed, blossomed and finally declined the ancient cultures, successively replacing each other, of states which at one time wielded considerable power – Sumer, Akkadia, Babylon and Assyria.

In the valleys of the Tigris and Euphrates at the end of the fourth millennium B.C. and the beginning of the third, an alphabet sprang up – cuneiform-later assimilated by many peoples of the ancient East. In Mesopotamia there was little wood and stone, and so clay, used for building houses and making untensils, was also used for writing on. The cuneiform symbols were scratched on a damp tablet with a stick made of bullrush. The exhibition presents cuneiform tablets of different epochs; the earliest go back to the fourth millennium B.C., the most recent to the third century B.C., and they contain extremely valuable historical information. These are documents from temple and imperial archives, depicting the economic system of the slave-owning states of Mesopotamia, legal documents, mathematical, religious and literary texts, exercises in cuneiform calligraphy, and even earthenware “envelopes” used to protect important documents from forgery. In the exhibition is the world’s oldest written relic, estimated to be more than five thousand years old (c. 3,300 B.C.)-a stone tablet with four symbols of Sumerian ideographic writing in which cuneiform has its origin. Here each symbol expresses an idea or a word.

Among the best examples of Assyrian monumental art are some alabaster reliefs, which bear the remains of the earliest painting. These include examples from the ninth century B.C. with representations of divine guardians and the Assyrian king Ashurnasirpal II, from the palace in the town of Nimrud; some eighth century reliefs depicting priests, from the palace of Sargon II in Khorsabad (Dur-Sharukin), and one with the figures of an archer and a shield-bearer from the palace of Tiglath-Pileser III at Nimrud. Reliefs played an important part in the decoration of palace rooms and were an original form in illustrating chronicles, the texts of which were often carved on the walls. These reliefs, specifically intended to glorify the power and might of the cruel Assyrian rulers and to immortalize their victories over enemies, bear the stamp of solemn, austere grandeur. The figures are frozen as it were in solemn poses, and the stony faces, framed in the schematically drawn ringlets of both hair and beard, reiterate the same type again and again.

Depictions of battles and mythological scenes are found in the carving on Assyrian seals and amulets made of semi-precious stones, such as agate, cornelian and chalcedony. The seal, the personal mark of the owner, was used for sealing doors, vessels and large baskets; taking the place of the signature, it ratified orders and treaties. The exhibition also presents Sumerian, Akkadian, Babylonian and Assyrian carved stones, many of which can rank among the finest masterpieces of the craft. In addition the exhibition introduces relics from neighbouring countries: painted vessels from Elam, Luristan bronze-ware and Phoenician glass. 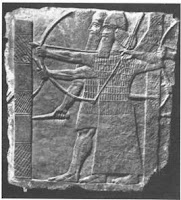 The Hermitage possesses a valuable collection of relics from Palmyra. Situated in Syria at the intersection of trade routes, Palmyra served as the intermediary between the countries of the Orient and the Mediterranean coastlands in the second and third centuries A.D. She reached the height of her power in the third century during the reign of Queen Zenobia, when the fame of the beauty of Palmyrian palaces and gardens spread throughout the world. Rivalry with Rome ended with the defeat of Palmyra and her collapse in the year 273. On display is the famous “Palmyrian Tariff”, a marble slab with a text in Aramaic and Greek expounding the law issued on April 18th,

137 A.D. concerning the levying of duty on goods imported into Palmyra. The Aramaic part of the text is the most important Semitic stone inscription known to science. Also in this room are some second and third century Palmyrian tombstones,- sculptural portraits of the dead carved out of limestone (Khayran, the scribe of a Roman legion, an unknown young woman, and others).

The first room (367) presents the celebrated group of relics, comprising clothes, fabrics and household objects, from the tumuli of Noin-Ula in the northern part of Mongolia, investigated by Kozlov.