The art and culture of Byzantium (5th-15th centuries)

Byzantium grew up as a result of the division of the Roman Empire during the fourth century A.D. into Western and Eastern Empires, the latter receiving the name of Byzantium. The centuries-old history of this state, which played so important a part in the shaping of European culture, came to an end in 1453 when the decaying feudal empire of the Palaeologus dynasty was conquered by the Turks.

The Byzantine collection in the Hermitage is one of the richest in the world. Its finest part, consisting of silverware, comes from treasures discovered for the most part in the Urals region and in the Ukraine. The exhibition gives us a clear picture of the peculiar features of Byzantine culture, which developed in the conditions of a growing feudalism, upon the basis of the old traditions of antiquity, and under the influence of ancient oriental culture.

Room 381 is given up entirely to early relics of Byzantine art, some of which were found during excavations in the town of Chersonesus: see the fifth – sixth century relief and marble capitals, and the case containing items of applied art. Special mention ought to be made of two fifth century marble pieces – a representation, traditional in early Christian art, of the Good Shepherd and a bronze polycandelon in the form of a Byzantine basilica.

Room 381 a. Antique motifs characteristic of early Byzantine art are found on some sixth – seventh century silver utensils, for example a dish with the figures of the mythological characters, Meleager and Atalanta, and a ewer decorated with figures of sea-nymphs (cabinet 3, case 4). Utensils bearing representations of a symbolic character, in the form of a cross or a Chi-Rho monogram (cabinet 6), testify to the appearance in art of new tendencies connected with the spread of Christianity. Occupying a prominent place in the exhibition are some items made of ivory, in the working of which Byzantine craftsmen reached a high degree of perfection. One of the outstanding exhibits in the collection is a diptych (c. 500) representing circus scenes, in which the tense moments of the contest between man and beast are convincingly conveyed (cabinet 3). The mosaic painting Angel is a characteristic example of Byzantine monumental art, specimens of which, as a result of the downfall of Byzantium, have been preserved in only a very few cases. 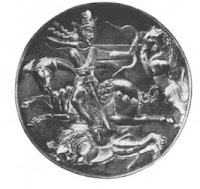 The exhibition consists basically of material obtained in recent years by Soviet scholars during archaeological research on ancient Slavonic settlements and burial-grounds, and on old Russian towns.

The exhibition presents relics of art dating back to feudal times from different Western European countries. In the Hermitage there are some excellent, and in many cases unique examples of Romanesque and Gothic styles, made by craftsmen whose names are now unknown.