The art and culture of India (17th-20th centuries)

The Hermitage has a rather small, but nevertheless interesting collection of works of both old and contemporary Indian art. The collection in the first section illustrates just one of the stages in the centuries-old history of India -the period of the feudal Mogul Empire from the sixteenth up to the nineteenth century.

In the section devoted to contemporary art there are works by the outstanding artists of the present day which have entered the Hermitage in recent years. 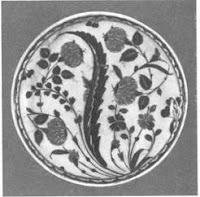 The items in room 368 acquaint ‘ the-visitor with the art of various regions of the country – Bengal, Southern and Central India, Gujerat, the Punjab. Among these can be seen some small marble, wooden and bronze sculptures of the sixteenth to nineteenth century, more often than not representing the Hindu gods and the heroes of the old Indian epics Mehabharata and Ramayana.

From the exhibition in rooms 369 and 370 special mention should be made of the large collection of seventeenth to eighteenth century miniatures, including examples of the art of the Mogul, Rajputu and small local schools.

Occupying an important place in the exhibition is one of the world’s finest collections of old Indian weapons. The offensive and defensive weapons are extremely varied and include helmets of openwork gilded steel, shields made from rhinoceros hide, pata swords with an armoured covering protecting the warrior’s arm, and kuttar daggers with the handle at right angles to the blade for the same purpose. Also displayed are some chakra, ring-like missiles with edges as sharp as blades, and side-arms with blades of Damascus steel (the home of which was India) richly decorated with engraving and inlaid with gold and silver leaf. Craft work of the seventeenth to nineteenth century is represented by some wonderful specimens of silk and velvet fabrics, carpets, ceramics, bronzes and objects made from ebony and ivory (rooms 369 and 370).

Room 371 contains a collection of modern painting, in which we can note in particular the Fire Ordeal of Sita (water-colour on silk) by the famous painter Barad Ukil, The Road to Mayavahtl by Nandalal Bos, Shacks and Sands by Bimal Das Gupta, A Meeting of Yogis and Spring by S. Roerich, Returning Home by Madhava Satvalekar, Toilet by Jaimini Roy, and a bust of Mahatma Gandhi by the well-known sculptor Chintamani Kar. There is also a nineteenth century screen of exquisite open-work ivory presented to the Hermitage by Djarwaharlal Nehru.

The art and culture of Japan (17th-20th centuries)

A prominent place in the exhibition is occupied by woodcuts, one of the most popular forms of Japanese art. In the second half of the seventeenth century a school known as Ukiyo-e ("Pictures of Our Transitory World") developed in the Japanese capital Yedo, present-day Tokyo.

We should note particularly some relics of Chinese writing - inscriptions dating from the fourteenth century B. C. on the bones of animals. These texts which were used for telling the future, are simple in content - isn't it time the harvest was begun, will the hunt be sussessful - and they enable us to determine the economic structure of the very ancient inhabitants of the country.