Room 56. Urartu, 8th – 6th centuries B.C. Urartu, otherwise called the Van empire, the most ancient of the then existing slave-owning nations within what is now the Soviet Union, held a position of supremacy in the first half of the eighth century B.C. among the nations of south-western Asia. The earliest information concerning Urartu was obtained as a result of excavations carried out in 1911 and 1916 by Russian archaeologists on the hill of Toprak-Kala, where in ancient times stood the Urartian capital Tushpa (upon the eastern shores of Lake Van in Turkey). Case 1 contains the bronze figurines of winged deities from Toprak-Kala, items typical of the Urartian art of the eighth and seventh centuries B.C. The engraved surfaces of the figurines were covered with gold and coloured with thick paint. The motionless impassive faces made of white stone, with the eyes and eyebrows inlaid with black stone, are nevertheless expressive in their own way. In the past these statuettes, monumental in spite of their small size, embellished the arms of a throne. A great contribution to the study of Urartian history was made as a result of archaeological excavations at Karmir-blur (Red Hill), from where a large number of the items in the exhibition originate. Many years ago, on Karmir-blur In the environs of Erevan, a fragment of a stone slab was found bearing traces of cuneiform. The inscription gave reason to suppose than at one time a fortress had stood there belonging to the Urartians, an ancient people whose name is preserved in the contemporary name of Mount Ararat. In the summer of 1938 an expedition under the leadership of Academician Boris Piotrovsky began excavations. Upon the strength of the cuneiform inscription found on a bronze door bolt (cabinet 5), the name of the citadel was determined – Teishebaini, i.e. the town of the god of war Teishebas. The research has produced a clear picture of the life and the destruction of Teishebaini, an important administrative and economic centre in the north of Urartu.

The fortress received a tribute in the form of food-stuffs, collected from the tribes of Transcaucasia, and after processing this was sent to the capital of the state, Tushpa. Buildings were discovered, intended for the production of sesame oil, with heaps of oilcake wastage; a workshop for the brewing of beer, a store-room for grain, where large quantities of barley, wheat, millet and flour were kept, and enormous wine cellars with huge vessels half buried in the earthen floor. It is reckoned that more than four hundred thousand litres of wine could be kept in these vessels. The fortress perished around 585 B.C. after a Scythian raid – bronze Scythian arrow-heads were found in the unkilned bricks of the fortress wall. During the assault a fire broke out, buildings collapsed in the flames, burying beneath them people and various objects. Much bronze-ware was found in Teishebaini – helmets, shields, quivers and ninety-seven bowls. These bowls of sparkling golden bronze produce, when struck, a long-lasting, melodic ring, and in addition each of them, like a bell, had the sound of a particuarr key. The inscribed helmet of emperor Sar-duris II is especially noteworthy; the inscription reads: To the god Khaldis, the protector of Sardurls, from the son of Argistls for his life’s sake. Excavations on the fortress are going on, the items found at Teishebaini being sent to the Armenian Historical Museum and to the Hermitage.

Room 58. Transcaucasia, 3rd century B.C. – 3rd century A.D The items displayed here have come from rich burial-grounds discovered upon the lands of Georgia, Armenia, and Daghestan at the turn of the century.

Exhibited in a number of cases are objects which have been taken from the burial-ground in the village of Bori in the Kutaisi region, among them a collection of first and second century bronze vessels of Roman origin (cabinet 2) and some household articles (case 2, cabinet 4). A magnificent goblet of ruby-coloured glass with a chased silver rim, dating back to the second century A.D., was found near the ancient Georgian capital of Mtskheta (case 6). In cabinet 7 are some locally made clay vessels and others from Syria, made of glass, which were found in graves near the village of Ashnak in Armenia. A large number of gold objects from the same graves are kept in the Gold Room. Set upon a pedestal is the capital of a pillar from the first century temple at Garni near Erevan, one of the most splendid relics of the architecture of antiquity. In cabinet 11 there is a magnificent silver dish (second century A.D.) depicting a Nereid on a sea horse surrounded by Tritons playing in the waves. The dish is of Roman origin and was found in 1893 near the village of Enkighend in Azerbaijan.

Room 59. Transcaucasia, 4th – 8th centuries A. D. Bronze utensils- dishes, censers and pitchers – were brought to the Hermitage in the 1920s from the high mountain village of Kubachi in Daghes-tan and nearby settlements, where for centuries they had been preserved by local inhabitants. This fine collection of bronze-ware occupies an important place among the relics of oriental culture.

Room 60. Northern Caucasus, 1st-10th centuries A.D. The exhibition consists of material from burial-grounds and shrines in Daghe-stan, Northern Ossetia and the area of the Kuban river. These places were inhabited during the first millennium A.D. by tribes of cattle-breeders and farmers whom ancient writers called Alans. Various discoveries, including coins, confirm that the Alans had connections with Rome, Syria, Parthia, Persia, Byzantium, and the Arab caliphate. From the burial-grounds along the Kuban at the site of Mpshche-vaya Balka and the village of Khasaut near Kislovodsk comes a unique collection of fabrics. In cabinet 6 are examples of Daghestan bronze-ware, statuettes used in rituals and open-work buckles of the eighth and ninth centuries. In Northern Ossetia were found some beads made of chalcedony, cornelian and rock crystal, some produced locally, others imported from the northern Black Sea coast-lands and from Asia Minor (cabinet 1); silverware (case 3); and Roman glass bottles for incense (cases 2 and 5). In the same burial-grounds in Northern Ossetia were found some Roman enamel fibulae, and belt buckles of local origin (cabinet 14). The outstanding item in the exhibition is a cup (2nd – 1st century B.C.) apparently made in Alexandria and found near the town of Alozdok. The cup has two walls of transparent glass, between which is a gold-foil design (case 2).

Room 62. Medieval Georgia is represented by a limited number of exhibits, among which should be mentioned a collection of chased silver icon frames of the eleventh – twelfth and fifteenth – eighteenth centuries (cases 2, 4 and 13). Special attention may be drawn to some carved details of architectural ornamentation of the sixth to sixteenth centuries. 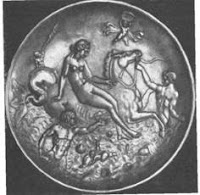 Room 63. Here there is a much larger collection of items, reflecting the culture of medieval Armenia. From the ancient capital, Dvin, we have some glazed and unglazed ceramics (cabinet 3) and fragments of stucco tiles of the ninth to thirteenth centuries used for decorating interiors (cases 2 and 4). The individual relics originate from the medieval capital of the Armenian kingdom, Ani – for example, fragments of twelfth century frescoes with the representation of the Virgin and Christ, and a stone slab with an inscription in Armenian relating to the erection in 1206 of the Anian fortress gates and towers. Cabinet 13 contains articles found in the fortress of Anberd, excavation work on which was led by J. Orbeli. Special mention should be irade of two twelfth and thirteenth century cast bronze mortars, decorated with plant designs, the figures of running animals and a decorative Arabic inscription.

A number of relics are associated with the Kilikian Armenian kingdom, which existed from the twelfth century up to the fourteenth on the north-eastern shores of the Mediterranean. These items include coins of the Kilikian monarch and a silver, three-panel folding icon made in 1293 in one of the Kilikian monasteries (case 17); a beautifully made silver cup, at the bottom of which is depicted the biblical King David playing the psaltery (case 16); and some Armenian illuminated manuscripts (case 14).

Room 64. Azerbaijan. The items displayed include locally made ceramics from the site of Oren-kala (twelfth and thirteenth centuries) and others imported from Persia-thirteenth century glazed tiles from the tomb of the Moslem saint Pir Hussein in the village of Khaneka in the Azerbaijanian Soviet Socialist Republic.

Room 65. Medieval Daghestan. This room contains a rich collection of twelfth and thirteenth century stone reliefs which adorned buildings, no longer preserved, in the village of Kubachi. One of these buildings was apparently the palace of the ruler, another a mosque. The reliefs are remarkable for the variety of subjects; there are scenes from the life of the peoples, a fight between two horsemen, and representations of fantastic animals and birds. Also of interest is a collection of twelfth and thirteenth century Daghestan bronze cauldrons, decorated with the figures of horsemen and beasts and plant designs similar to the depictions of the stone reliefs.

Rooms 61 and 66 contain examples of the work of Caucasian craftsmen from the seventeenth to the nineteenth century which testify to the close bond between their work and national traditions. These items include some woolen rugs, notable for the richness of design and the fine colour harmony. In cabinets 1 and 3 are some glazed ceramic utensils, and case 28 contains a selection of side-arms. Among the objects made of metal can be singled out two cast bronze candlesticks, made in the seventeenth century, with delicately engraved decorative designs. The art of stone and wood carving is represented by some very interesting examples.

The first room (367) presents the celebrated group of relics, comprising clothes, fabrics and household objects, from the tumuli of Noin-Ula in the northern part of Mongolia, investigated by Kozlov.

The exhibitions presents the most important stages in the artistic and historical past of the Tadjik, Uzbek, Turkmen, Kazakh and Kirghiz Soviet Socialist Republics.