Most of the items in the exhibition come from the memorial museum of Peter the Great (called Peter the Great’s Study) founded shortly after his death and attached to the Kunstkammer (Cabinet of Curios) of the Academy of Sciences.

Documents, engravings, books, instruments, tools and works of art all point to the important changes which took place in Russia as a result of reforms introduced by Peter. The successful development of the home industry may be represented by a silver bowl iii the form of a small ship, made of silver obtained from the mines of Nerchinsk in Siberia, and by a salver of bronze from the copper works of Ekaterinburg. The armourer’s workshops of Tula and Olonets, established during the reign of Peter, produced guns, pistols, mortars, and a cast-iron cannon bearing the inscription: Olonets, 1711. There is also a large display of astronomical, artillery and navigational instruments connected with the creation of the Russian navy and artillery. Of further interest is a collection of various medical instruments. Numerous engravings commemorate important events during the Great Northern War, which lasted from 1700 until 1721. Teaching tables entitled A New Method of Arithmetic, The Mirror of the Shies and A Pictures Map of the World remind us of the fact that following the reforms carried out by Peter, the whole system of education underwent a radical transformation and the so-called “Arithmetic” schools (providing a general education) and special schools (navigational, artillery, medical) were organized. A printing press from the Senate printing office made in 1721 arouses considerable interest.

Displayed in room 155 is a rare collection of duplicating lathes from Peter’s own workshop. The large lathe made by the talented Russian mechanic Andrey Nartov (1693-1756) is unique. The details were painstakingly designed by hand, and the lathe is complete with mechanical support.

In room 156, amongst articles turned on these lathes, is an ivory candelabrum, certain details of which were made by Peter himself. 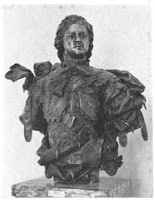 In the centre of the room stands the “Triumphal Column”, a model of the monument which they intended to erect on one of the squares in St Petersburg to commemorate Russian victories in the Great Northern War. The stem of the column consists of eight bronze cylinders with scenes from land and sea battles, and the column is surmounted by a statue of Peter, a copy of the wooden sculpture made by Carlo Bartolommeo Rastrelli (c. 1670-1744), the father of the great architect. The display also includes some memorial items, namely the uniform and hat worn by Peter on the day of the battle of Poltava. In room 157 are exhibited numerous objects of art and ornaments in ivory, metal and glass, which show the development during Peter’s time of the different branches of the applied arts.

Room 158 contains works of painting, sculpture, drawing and engraving. Notable for its great artistic merit is the bronze bust of Peter the Great created by the sculptor Carlo Bartolommeo Rastrelli in 1723. The facial expression, the impetuous turn of the head reveal the complex character of the tsar, his inflexible will, intellect and energy. On the breastplate an allegorical scene is depicted: Peter is carving from stone the figure of a woman wearing a royal crown, personifying the might of Russia. Engravings by the talented craftsman Alexey Zubov (1682 – after 1744), outstanding among which is the Petersburg Panorama (1716), present the topographical record of the city on the Neva during the first ten years of its existence. In a horizontal case near the window is a collection of portrait miniatures on enamel, among them a group portrait of Peter and members of his family, the work of the famous artist Musikiysky (died 1737)

Displayed in room 159 are items of furniture and decorative objects from the first quarter of the eighteenth century, among them the tapestry, Peter the Great at the Battle of Poltava, indicating the achievements of the Russian craftsmen of the St Petersburg tapestry workshop which was set up in 1717.

Occupying pride of place in room 160 is the effigy representing Peter seated in an armchair. The statue was created by Carlo Bartolommeo Rastrelli in life size (Peter was 6 ft. 8 in. tall) immediately after the death of the tsar. Wax impressions were made of the face, hands and feet, the body was cut from wood, and the wig, according to legend, was made from Peter’s own hair. The figure is dressed in the robes worn by the tsar at the coronation of Catherine I in 1724.

Room 163 contains material devoted to the work and activities of Mikhail Lomonosov (1711-1765). As a result of many experiments.

The first three rooms contain exhibits which give a general picture of the social history of Russia in the first quarter of the nineteenth century. There are portraits of the representatives of the main social classes of the Russian state, examples of costumes of that period, and also prints showing towns and villages.