The Memorial Room of Peter the Great (194) was decorated in 1833 by Auguste Montferrand. The walls are covered with crimson Lyons velvet, with two-headed eagles embroidered in silver, and upon a dais in the recess stands the throne of the Russian tsars. Above the throne there is a painting by the eighteenth century Italian artist Jacopo Amiconi portraying Peter the Great beside Minerva, the goddess of wisdom. Overhead on the side walls are two panels representing Peter in the battles of Lesnaya and Poltava. The room was restored in the original style after the fire of 1837 by the architect Vasily Stasov.

The Armorial Hall (195) was designed by Stasov after the fire. The pictures of the coats of arms and heraldic emblems of all the provinces of Russia, attached to bronze chandeliers, gave the name to the hall, which was intended for balls and receptions.

The 1812 Gallery (197) was designed in 1826 by Carlo Rossi and later restored by Stasov. On the walls hang more than three hundred portraits of generals engaged in the War of 1812, among them the portraits of Kutuzov (full length) and his companions-inarms Bagration, Yermolov, Rayevsky, Davydov and many others. The portraits were painted by the famous English artist George Dawe (1781-1829) who, with the assistance of the Russian painters Poliakov and Golike, worked in the palace from 1819 to 1829 on the completion of the commissioned work. The equestrian portraits of Alexander I and his ally in the war with Napoleon, Frederick-William III of Prussia, were painted by the German artist Franz Kruger (1797–1857), and that of the Austrian emperor Francis I, by the Austrian Peter Krafft (1780-1856).

At the time of the fire in 1837 the portraits were removed from the flames by guardsmen assisting in the rescue of the Palace treasures.

One’s attention is drawn to some empty frames filled with green taffeta. The inscriptions on the frames give the names and ranks of those who fell in battle and whose portraits it was not possible to reproduce.

The 1812 Gallery was eulogized by Pushkin as a monument to the glory of Russia.

There is a chamber in the palace of the Tsar,
Its treasures neither gold, nor velvet are ….
……………………………………………..
Drawn by the artist’s hand in compact groups
Stand chieftains of triumphant Russia’s troops
Crowned with the frame of 1812- a year
Whose memory every Russian heart holds dear.

The St George Hall (198), also known as the Large Throne Hall, is solemn and austere in appearance. It is decorated with white Carrara marble imported from Italy and gilded bronze. The parquet floor, made from sixteen different kinds of valuable wood, mirrors exactly the bronze ceiling pattern. Opposite the entrance to the room is a marble bas-relief, St George Slaying the Dragon, executed by the Italian sculptor Francesco del Nero after a drawing by Stasov, who designed the room in full (1842). In the St George

Hall, which occupies eight hundred square metres (8,608 sq. ft.), there is a map of the Soviet Union made of semi-precious stones, standing on the same spot as the throne in former times. The craftsmen from Leningrad and Sverdlovsk who created the map emerged as worthy successors in a long line of Russian stone carvers, and the map has twice been on view at world exhibitions – in 1937 in Paris, where it was awarded a Grand Prix, and in New York, in 1939. Beautiful and also of great precision, the map is made from forty-five thousand pieces of stone-jasper of various kinds, lapis lazuli, rhodonite, porphyry, etc. – and on the surface of the map, which covers an area of twenty-seven square metres (290 sq. ft.), the different physical features are shown in relief. The valleys are green, the mountain tops snow-white, the seas and oceans blue, and the contours of the mountain ranges brown. The diamonds of the hammer and sickle sparkle and gleam against the ruby star representing on the map the capital of the Soviet Union, Moscow. 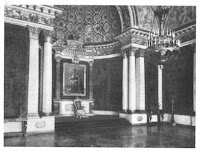 The Memorial Room of Peter the Great. Winter Palace

The Antechamber (192) leads to a suite of state rooms overlooking the Neva. Next to it is the Great Hall (191), also known as the Ballroom which, with an area of over one thousand one hundred square metres (12,716 sq. ft.), is the largest room in the Palace. Nowadays the hall is used to house temporary exhibitions.

The Concert Hall of the Winter Palace (190) contains an exhibition entitled Russian Silverware: late 17th – early 20th centuries. The most noteworthy item in the exhibition is the tomb of Alexander Nevsky in the form of a sarcophagus, embellished with rich ornamentation and bas-reliefs depicting scenes from the life of Alexander Nevsky, and with an ornamental pyramid bearing the figures of winged genii. On the shields which the genii hold in the hands are engraved lines from poems by Mikhail Lomonosov, the eminent Russian poet and scientist, dedicated to this unusual work, created by Russian craftsmen whose names have not come down to us. The tomb was made in the middle of the eighteenth century at the St Petersburg Mint, and in all almost 1.5 tons of silver were used, obtained in the space of one year from the Kolyvan mines in the Altai region of West Siberia.

The Malachite Room (1S9), one of the most beautiful rooms in the Palace, designed in 1829 by A. Briullov, is notable for its malachite columns, pilasters and mantelpieces, created in the method known as Russian mosaic. In this method the stone or metal base of an object was tiled with thin, carefully polished pieces of a rare, deep green stone obtained in the Urals. Over two tons of malachite were used on the decoration of the room. Russian malachite work, for which the Peterhof Lapidary Works was particularly famous, was without equal in the world and enjoyed extremely high esteem.

The historical associations of the Malachite Room are full of interest. During the night of November 7th the last meeting of the counter-revolutionary Provisional Government took place here. Upon the storming of the Winter Palace the ministers took cover in the adjoining room, the Private Dining-room (188), where they were arrested by the revolutionaries. Leading detachments of revolutionary soldiers burst into the Palace from Palace Square by the entrance nearest the Admiralty, the entrance now bearing the name

Oktiabrsky in memory of this event. The Private Dining-room, designed in 1894 according to the plan of the architect Meltzer, still retains the appearance and atmosphere of those historic days of October 1917.

The first three rooms contain exhibits which give a general picture of the social history of Russia in the first quarter of the nineteenth century. There are portraits of the representatives of the main social classes of the Russian state, examples of costumes of that period, and also prints showing towns and villages.

Most of the items in the exhibition come from the memorial museum of Peter the Great (called Peter the Great's Study) founded shortly after his death and attached to the Kunstkammer (Cabinet of Curios) of the Academy of Sciences.

Room 163 contains material devoted to the work and activities of Mikhail Lomonosov (1711-1765). As a result of many experiments.