The most prominent figure in the Flemish art of the seventeenth century was Peter Paul Rubens (1577-1640), a many-sided artist of great talent, the creator of celebrated paintings, and the teacher of the leading Flemish artists. The Hermitage collection comprises twenty-two paintings and nineteen sketches of Rubens, and there are some excellent drawings of his in the section devoted to this branch of art.

In the small picture The Statue of Ceres, painted between 1612 and 1616, Rubens re-created on canvas the sculpture he had seen in Rome. Beside the rough surface of the ancient marble of the statue and the cold stone of the surrounding architecture, the plump bodies of the bustling cupids, who are adorning with heavy garlands of ripe fruit the niche containing the image of the goddess, seem even more alive. And in this contrast of ancient marble and a “prosaic” still life lies the very essence of Rubens’ creative work, in which he combined an assimilation of antique exemplars with an optimistic and impassioned perception of life. The Statue of Ceres is particularly valuable because it was painted in all its details, including the still life, by Rubens’ own hand. Subsequently the still-life part of his paintings was executed by his assistants, for example Snyders. The Union of Earth and Water, painted between 1612 and 1615, is one of the finest of the artist’s early works, in the conception of which the symbolic union of the goddess of the earth, Cybele, and Neptune, god of the sea, personifies peace and the prosperity of the state. The beauty of the large naked bodies, the rich colours, and the joyful view of the world transform Rubens’ work into a jubilant song In praise of life. The Descent from the Cross (1612-1615) is an altar-piece painted for the Capuchin monastery at Lierre, near Antwerp. The general tone of the composition is one of restraint and solemnity. The figures on the canvas are realistically portrayed, and some, for example, the young John, are genuine folk types. Overcome with grief, they are trying to lay the body on the ground as gently as possible. The contrast of the bright clothes and the pallid body of the dead Christ is full of poignant meaning; his hand, already affected by decomposition, is resting in the warm, pink hand of Mary Magdalene.

Deep psychological penetration into human emotions was not characteristic of Rubens, although in his monumental canvas, Feast at the House of Simon the Pharisee, painted about 1618 with the assistance of his talented pupil Van Dyck, there appears a whole gallery of striking types and characters. The focusing of the centre of interest to the right where both the main figures, Christ and the sinner, are portrayed, and the contrasting colours heightened the dramatic intensity of the story. The very treatment of the figures and the introduction of a number of details from everyday life (a dog chewing a bone, servants with dishes of food, an old man looking through a pince-nez at the bare shoulders of the beautiful sinner) lend this altar-painting a completely secular character. 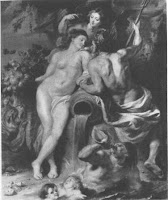 Between 1618 and 1620 Rubens was drawn to dramatic themes, which he turned into compositions full of movement and passion. Characteristic of these works is the magnificent sketch Lion Hunt (c. 1618) for the painting which is in the Pinakothek in Munich. From 1622 to 1625 Rubens, commissioned by the French queen Marie de’ Medici, widow of Henry IV, created a cycle of paintings entitled The Life of Marie de’ Medici for the decoration of the Luxembourg Palace in Paris. These are now in the Louvre. In the Hermitage there are five sketches made by Rubens himself for paintings which were executed by his pupils. The best of these is the Coronation of Marie de’ Medici. The queen, and the cardinal who is placing the crown on her head, are surrounded by members of the royal family and courtiers, who are represented by actual portraits. Rubens accurately reproduced the event and coped easily with the difficult job of arranging the enormous composition (the canvas measures 727 X 394 cm.-23 ft. 20 in. X 12 ft. 10 in.).

Dating from the period of 1629 to 1634 are the Hermitage sketches of two parts of the huge ceiling in the Banqueting House in the royal palace of Whitehall in England.

Rubens’ landscape painting is represented by two pictures -an early work, The Carters (c. 1620), and a late one, Rainbow Landscape (1630).

The Hermitage painting Perseus and Andromeda, dated 1620- 21, is very well known. Perseus, the hero of the ancient myth, freed the princess Andromeda by killing the sea-monster to which she had been brought as a sacrifice. The painting represents the moment when the winged goddess of Glory crowns Perseus with a laurel wreath; at the feet of the victor lies the dead body of the monster, and Andromeda stands, her eyes lowered, before her rescuer. The charm of her naked body lies not in its classical austerity but in the throbbing life, in the warmth, and full-blooded roundness of form.

One of the masterpieces of the Hermitage collection is the Portrait of a Lady of the Chamber (1625), an unpretentious but charming portrayal of a girl in the full bloom of youth. The liquid fluency of brushstroke in this picture is remarkable even for Rubens. The paint, with one shade passing almost imperceptibly into the next, is like enamel, delicate and limpid, as though lit from the inside.

In 1634, on the occasion of the traditional entry into Antwerp of the new Spanish ruler, Rubens led the work of decorating the town for the celebrations. The decorative structures – arches, porticos and transparencies- were made from flimsy materials such as boards, plaster and canvas, and perished soon afterwards. But Rubens’ sketches have been preserved. In the sketch entitled Mercury Leaving the City of Antwerp Rubens, using the language of allegory, speaks of the need to end the war which was disastrous for Flanders; The Temple of Janus is also devoted to this theme. Rubens wrote: “For myself I wish that the whole world were at peace, and that we might live in a golden age, not an iron one.”

In the last years of his life Rubens painted his famous Bacchus (c. 1640). Rejecting the tradition according to which Bacchus was portrayed as a beautiful youth, the god of wine and merriment was represented by the great master as hearty and boisterous, in keeping with Flemish folk spirit. A warm, golden light envelops the figures and the distant hills and broad plains which stretch behind them, and against the background of this majestic landscape, the scene of the bacchanalia appears as the embodiment of the “mighty” element of nature. 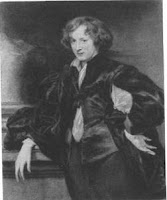 Room 246. First place among the painters of the Flemish school after Rubens belongs to Anthony van Dyck (1599-1641). His work is superbly represented in the Hermitage, where there are twenty-five paintings, mainly portraits, illustrating different periods in the artist’s work.

The portraits painted between 1618 and 1620 (Portrait of Bal-thasarina van Linick, A Family Group, etc.) usually featured Antwerp burghers; they were executed with a sure hand and were lifelike, though somewhat monotonous as regards their composition. Already in these early works we can discern the young artist’s desire to convey the psychological condition of the human being and to gain insight into his inner world. Van Dyck was in Italy from 1621 to 1627, where he became the favourite portrait painter of the nobility, and his passion for the painting of Titian , brought about a new tendency in his work. The simplicity of the early works is replaced by a more striking representation of his subject, a more subtle manner, in both the methods of painting and the compositional arrangement. Dating from the 1620s are the Portrait of the Banker Antoine Lumagne and the Portrait of a Man, formerly thought to be the Antwerp physician Lazarus Maharkyzus. Van Dyck’s life was an unbroken series of triumphs. In his Self-portrait (1628) he appears before the spectator as a minion of fortune – sophisticated, charming and casually elegant. Well illustrated in the Hermitage is the latter period of the artist’s work. His years in England (1632-1641) were very successful, with immense prestige at the court of Charles I. He created a whole gallery of formal portraits of the English aristocracy. These include portraits of Charles I,

Queen Henrietta Maria, Henry Danvers the Earl of Danby, Thomas Wharton and others.

The Virgin with Partridges (c. 1632) is a typical Van Dyck composition on religious theme, treated in the manner of a secular scene, and with that refinement and elegance which are the distinctive features of his individuality as an artist.

Room 245. Jordaens, Snyders, Brouwer, Teniers. Jacob Jordaens (1593-1678), who became, after the death of Rubens, the leading figure in the Flemish school, worked in several different genres.

He loved to employ as a basis for his paintings subjects associated with national customs. An excellent example of this is The Bean King (c. 1638), which portrays the traditional revel on Christmas eve. Each of those present at the feast receives a piece of pie, and the one who finds in his piece the bean baked in the pie is proclaimed the “bean king”, the head of the table. In this painting the vivid brush of Jordaens caught the unrestrained, somewhat vulgar mirth of a Flemish burgher family.

Snyders. Fruit in a Bowl

The heroic fervour of Rubens was echoed, though in a strikingly different way, in the still-life painting of Frans Snyders (1579- 1657). It seems that all the riches of the earth and of the depths of the sea are found in the amazing wealth of his paintings from the Shops series. The picturesque heaps of fruits, vegetables, game and fish, displayed in an unusual array, set each other off to great effect. Each composition is built up around some particular highlights of colour; in the fish shop there are hunks of pink salmon, in the shop selling game the white body of a goose, and in the vegetable shop the red blouse of a woman. Snyders was fond of introducing into his paintings the figures of people and animals, which is in general a characteristic feature of Flemish still-life painting, and he often includes in them a narrative element.

The vigorously energetic paintings of Paul de Vos (c. 1596- 1678)- The Leopard Hunt, The Bear Hunt, and The Deer Hunt -are examples of a type of painting which was particularly popular among the Flemish nobility, who used such pictures to decorate hunting lodges of palace rooms.

Adriaen Brouwer (1606-1638), a pupil of the famous Dutch painter Frans Hals, was a leading exponent of genre painting, which in seventeenth century Flemish art played a rather modest role. The heroes of Brouwer’s works are the representatives of the lower strata of urban society and sometimes peasants {Scene in a Tavern, The Flute Player, Peasants in a Tavern). His art, sombre, realistic, reflecting the unprepossessing sides of reality, marks Brouwer as the most democratic among the Flemish artists.

David Teniers the Younger (1610-1690), a pupil of Brouwer and a popular genre and landscape painter, is represented by more than thirty canvases. Teniers, who often portrayed peasant life, chose idyllic scenes out in the country, festivals and weddings, rather than the working, everyday life of the village. His paintings, consistent in their silvery tones, are notable for their great artistic mastery.

In the seventeenth century Holland, which had established as a result of the revolution the most progressive contemporary social system, the bourgeois republic, experienced a great upsurge of cultural activity, which manifested itself also in great successes in the sphere of painting.

The small but valuable collection in the Hermitage enables us to trace the major lines of development in English art, which reached its highest peak in the eighteenth century.

The Hermitage collection of Spanish painting is one of the richest and most significant in the world. Among the sixteenth century paintings two works by Luis de Morales (1509-1586), Mater Dolorosa and Virgin and Child, attract considerable attention.