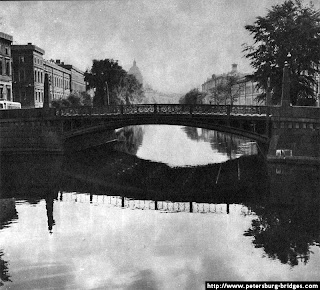 It was designed by W. Hastie, a St. Petersburg architect, who, using the idea proposed by Robert Fulton, the well-known American engineer, decided to construct a span in the form of a slightly arched vault composed of cast-iron blocks resembling boxes turned upside-down, perforated for bolts to hold them together. Many of those who followed the work on the project doubted whether the bridge would be durable; but their doubts were groundless: the span is as strong as ever, though it has been in service for 170 years. 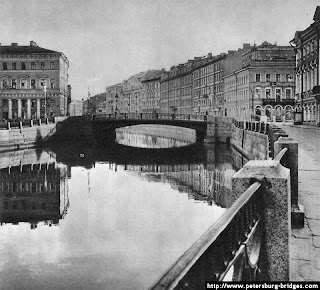 Traffic in Nevsky Prospekt grew apace meantime, and the bridge was soon too narrow to handle it. It was widened, accordingly, by adding footwalks on either side, which rested on metal cantilevers. In early September of 1842, one of St. Petersburg newspapers commented as follows: “St. Petersburg’s liveliest spot was fenced off the other day to screen a passage-way for pedestrians along the left side of the Police Bridge, and this is now the topic of the day. They are building a kind of balcony the entire length of the bridge, which will widen it; or a footway, at any rate. . . and promenaders in the Nevsky will then be able to stroll this winter beyond the Police Bridge, as far as the corner of Admiralty oquare. 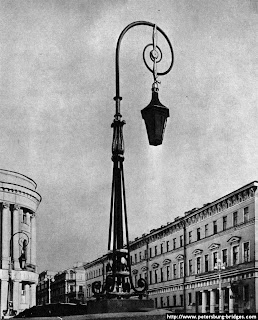 In 1844 asphalt blocks were used -for the first time in Russia-to pave the Police Bridge, and in this connection a newspaper reporter wrote the following lines: “I have been admiring daily the experimental paving of the crest of the Police Bridge with asphalt. Cast into cubes, asphalt stands up to the severest tests, for there is probably no other spot where traffic could be heavier than over this bridge.” When tram-lines were laid over it between 1904 and 1907 the bridge was widened again by the addition of several arches of similar construction, and certain alterations were made in accordance with a project drawn up by L. llyin, including the installation of the metal lamp-posts surviving to this day. 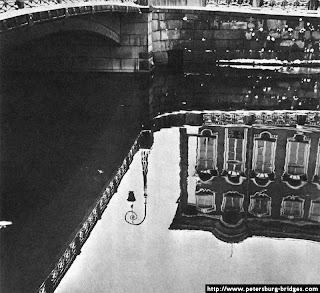 The architectural appearance of the city’s first cast-iron bridge is a good example of the way a new structural material can create new architectural forms. Cast iron is nearly five times stronger than granite; with the introduction of this material it became possible to build arches of entirely novel proportions, not so high and more sloping, and to make them lighter and more graceful than the arches of the eighteenth century masonry bridges. The new structure proved very successful and the Hastie project was accepted as a pattern; indeed, it was the world’s first standard metal bridge design which led to the manufacture, in the late 1810s, of cast-iron blocks for a whole series of new bridges that were to span the Moika. 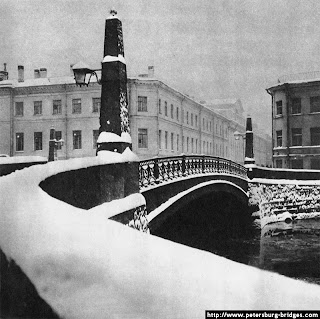 Work on this project was interrupted by the War of 1812. In 1814, however, the first of the series, called the Red Bridge, spanned the Moika at Gorokhovaya Street. Although one hundred and forty years later its cast-iron vault was replaced with a modern structure of steel, the bridge has retained its original appearance, for Soviet experts took particular pains to restore the old granite obelisks with their lamps and gilded globes, as well as the railing separating the roadway from the footwalks – Hastie’s notable contribution to traffic safety. 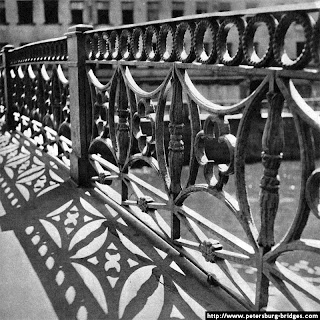 Next after the Green and Red bridges came the Blue Bridge, completed in 1818. All three, incidentally, owe their names to the fact that the old timber structures had been painted green, red and blue, respectively.

In the early 1840s the construction of Mariinsky Palace was completed in the vicinity of the Blue Bridge. 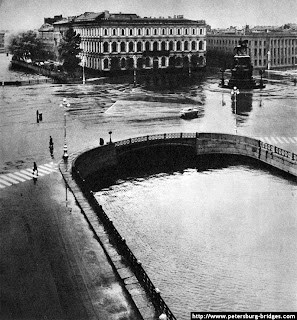 In 1842-43 the Blue Bridge was reconstructed in such a manner that it came to form an extension of St. Isaac’s Square, attaining a width of nearly one hundred metres, which makes it one of the world’s widest bridges. The Potseluyev Bridge, the fourth cast-iron span over the Moika, was built in 1816 in Glinka Street, near the confluence of the Moika and Kriukov Canal. Potseluyev was the name of a tavern-keeper who used to do business once upon a time on the left bank of the Moika, near the bridge. The name, however, derives from the Russian for “kiss”, and legend prefers a more romantic explanation. There used to be a naval barracks nearby, it says, and sailors leaving to join their ships used to kiss their sweethearts good-bye on the bridge.

In 1907-8 the old cast-iron vault of the Potseluyev Bridge was replaced with a steel arch designed by A. Pshenitsky; nevertheless the general aspect of the bridge remained practically unchanged.

Bridges over the Neva

"And bridges spanned the waters' width..." When Pushkin wrote his immortal poem, The Bronze Horseman, those bridges in masonry, wrought-iron and cast-iron spanned as yet only the creeks and canals of the southern section of the Neva delta.