St. Petersburg was founded on May 16 (27), 1703, when the corner-stone of the future Peter and Paul Fortress was laid on Hares’ (Zayachy) Island. Simultaneously the construction of timber dwellings started on the right bank of the Neva, on Gorodovoy Island which now forms part of the so-called Petrograd Side. 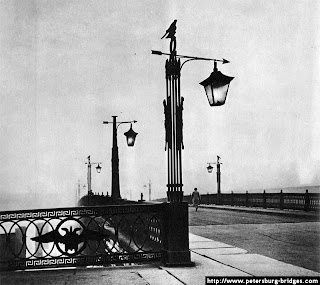 At the same time, apparently, a pontoon timber bridge was built to link the fortress with Gorodovoy Island. It was the newly-founded city’s first bridge; its decking rested on logs laid on wooden barges. In 1706 construction was begun on new brick bastions for the Peter and Paul Fortress, and it was decided to replace the pontoon bridge with a more durable structure, also of timber but resting on piles. A German traveller visiting St. Petersburg in 1710-11 described the new structure as “an excellent movable bridge, about three hundred paces 8 long, with two bascule spans”. In 1738 it was rebuilt again: the timber middle section was left intact, but at either end masonry arches were built; these arches formed the abutments of the present Ioannovsky Bridge connecting the Petrograd Side with the Ioannovsky Gate at the eastern end of the fortress.

Ioannovsky Bridge as we know it today, though a direct descendant, so to speak, of the one built in Peter I’s lifetime, looks quite different: new timber piles now support girders of steel. In the 1950s the bridge was decorated with handsome metalwork lanterns and railing, imitating specimens current in the first quarter of the nineteenth century. In 1713 a major road was laid through the forests and swamps of the Neva’s left bank towards the Admiralty building. This was the future Nevsky Prospekt, the city’s most important thoroughfare. Where the road was blocked by the Fontanka a timber bridge was launched in 1715. In those days the Fontanka marked the city limits, and a military post was maintained on the spot. The bridge had been built by a company of soldiers under the command of a lieutenant-colonel named M. Anichkov, and so it came to be known as Anichkov Bridge, a name it has retained to this day despite the frequent capital reconstructions it has undergone. The banks of the Fontanka around its intersection with the new thoroughfare were so swampy at the time that the original Anichkov Bridge was four times longer than the present structure. 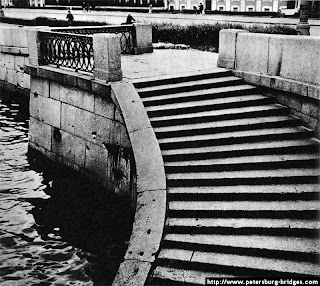 Two or three years later, a second timber bridge was built, this time at the intersection of the new thoroughfare and the Moika. It was painted green at one time, and was accordingly known as the Green Bridge. In the 1770s, however, a residence for the Chief General of the St. Petersburg police department was erected near this bridge, and the latter came also to be known as the Police Bridge. By 1749 there were some forty timber bridges in the city, about half of which were movable bridges of the bascule type. Many had been designed by Harman van Boles, the civil engineer who had built, in the late 1710s, the tall wooden spires of the Admiralty and the SS. Peter and Paul Cathedral. It is noteworthy that even in Peter I’s day timber bridges were often of standard design. In the early decades of the eighteenth century traffic across the Neva was carried on by boat in the warm season and over the ice in winter. Building a bridge across the main channel of the Neva was a serious engineering problem; besides, Peter himself realized that such a bridge would interfere with shipping. But the city kept growing, and the need of a bridge was becoming more and more pressing. Finally, in 1727, a pontoon timber bridge was built to link the banks of the Neva next to St. Isaac’s Square, approximately where the famous Bronze Horseman – a monument to Peter I – now stands. This bridge lasted only to the end of the autumn, however, and for the following five years no effort was made to relaunch the bridge. In 1732, artillery lieutenant F. Palchikov hastily built a pontoon bridge on the same spot. There was no time to procure the special kind of pontoons needed, so that privately owned barges had to be requisitioned instead, and it was only a year later that a pontoon bridge of the regular type was floated. Since then, down to the middle of the nineteenth century the St. Isaac’s pontoon bridge was floated every year, at first only during the warm season, then, from 1779 on, in winter as well; channels specially hewn in the ice were used for the purpose. Twice a year, however, during freeze-up and ice drift, the bridge had to be hauled ashore to keep the wooden pontoons from being crushed.

When the reconstruction of St. Isaac’s Bridge was undertaken, in 1820, by A. Betencourt and G. Trait-teur, masonry abutments were built at either approach, faced with granite and embellished with handsome curving stairways. They can still be seen today where the quay juts outward at two points: opposite the Bronze Horseman and near the former Riding House across the river. 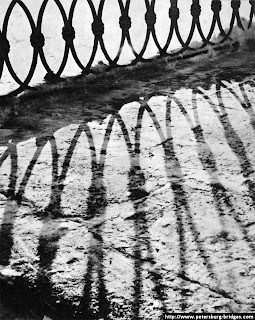 The bridge ceased to exist long ago. On June 11, 1916, it caught fire from the sparks of a passing steamer and burned down. During the eighteenth and nineteenth centuries the Neva’s main stream and northern effluents, the Bol-shaya (Big), Sredniaya (Middle) and Malaya (Small) Nevkas, were spanned by several timber pontoon bridges. In 1758 the Tuchkov Bridge was built between Vasilyevsky Island and Gorodovoy Island (now part of the Petrograd Side); and in 1786, the Voskresen-sky (Resurrection) Bridge joining the left bank of the Neva and the Vyborg Side not far from the present Lenin Square. In 1760 the Stone Island (Ka-menno-Ostrovsky) Bridge was built over the Malaya Nevka and in 1786 – the Stroganov Bridge over the Bolshaya Nevka near Stone Island (Kamenny Ostrov);
and in 1825 the district around the Field of Mars was linked with the Petrograd Side by a pontoon bridge known as the Troitsky (Trinity) Bridge. All these bridges were subsequently replaced with permanent structures, initially made of timber and later of steel.

Not a single pontoon bridge exists in St. Petersburg now, though timber-pier bridges are still to be found at the Peter and Paul Fortress, on the Kirov Islands and along the Obvodny Canal. Fewer and fewer of these remain, however, for timber is not so durable a material, and each p’assing year sees these old bridges being replaced here and there with modern, more permanent structures of steel and reinforced concrete.

If Saint-Petersburg is known as the City of Bridges, there is every reason for the name, for sixty-eight rivers, canals and creeks criss-cross it in all directions, cutting it up into forty-two islands, large and small.