Italian culture, 700-100 B.C., was the basis upon which grew up the antique culture of the slave-owning society of Rome.

The exhibition in room 130 (the Hall of Twenty Columns) opens with a section devoted to the art of Etruria, the most important region of ancient Italy, which reached its apogee in the seventh and sixth centuries B.C. The majority of the items in the Hermitage come from Etruscan tombs. Here note especially the distinctly original pieces of Etruscan ceramics – pitchers, amphoras, some fancy-shaped vessels, and enormous pots for wine on tall stands. The smooth, clean form and brilliant surface give these buc-cheri (articles made of smoked clay) the appearance of being made of metal (table 1, cabinets 4 and 33). The Etruscans excelled in the technique of processing metal, for example bronze, and this is seen from two superb specimens, the head of a lion made in the sixth century B.C. and a fifth century figure of a youth. The latter is a cinerary urn, representing a reclining figure, in the conventional pose of a person taking food at table. The muscles of the body are emphasized, and the classically proportioned face wears an expression of calm. The head of the lion is a fragment of one of those statues that were placed at the entrance to the burial vauls of the nobility in order to drive away evil spirits. The display also includes some bronze-ware of the sixth and fifth centuries B.C., notably statuettes, bronze mirrors, a bowl with a handle in the form of a Triton, and a tripodal censer with an open-work frieze. Etruscan terracotta is represented by some third-second century cinerary urns in the form of small boxes, with a relief on the outer wall and the reclining figure of the deceased on the lid. The exhibition also possesses copious examples of the ceramics produced in the Greek towns situated in Campagna, Lucania, Apulia and Calabria. Of wide renown is the black-lacquered hydria adorned with a relief that has kept its gilt and traces of colour. Found in the nineteenth century in the town of Cumae, in has been called the Regina Vasorum on account of its fceauty of form and richness of decoration.

Towards the end of the third century B.C., one by one all the provinces of Italy were brought under the subjection of Rome.

Room 127. Ancient Rome, 1,000 B.C.-early 1st century A.D. The distinctive feature of Roman art was the sculptural portrait. Roman sculptors, whose names are unknown to us, portrayed in marble with great realism their contemporaries: statesmen, ‘philosophers, emperors, military leaders, and distinguished Roman men and women. Assembled in the Hermitage are around one hundred and twenty portraits (rooms 106, 107, 127, 128). This superb collection makes it possible to trace the development of Roman portraiture over a period of almost four hundred years. Belonging to the late period of the republic (second and first centuries B.C.), when portraiture became an independent genre, is the bronze bust of a Roman (No. 229), two male marble portraits (Nos. 181, 183a), and the portrait of a woman (No. 138a). Each of them has a characteristic simplicity and is a faithful and accurate reproduction of the appearance of the model; in the past marble portraits were tinted, which gave them even greater expressiveness. The statue of the emperor Octav-ianus Augustus seated on a throne (first century A.D.) is a typical example of an official portrait from the time of the Empire. Found in Cumae, the statue was made during the last years of Augustus’ life; he is portrayed, however, as a young man of athletic build (at the very time when the Roman historian Suetonius was writing about the frailty of his body). The individual features of the face are smoothed over, and the hair is conveyed with great accuracy in the way that Roman sculptors loved. The emperor is portrayed half-naked; in one hand he is holding a sceptre and in the other the figure of the winged goddess Victory. It was in this manner that the ancient Greeks depicted Zeus, and the Romans Jupiter, their chief deity. Such deific portrayals of the emperor stood in Roman temples, public buildings and on city squares. 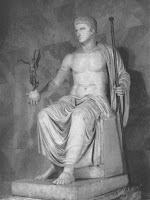 At the time of the Empire relief sculpture occupied a prominent place in the decoration of palaces, triumphal arches and columns. The edifices, built on brick with an admixture of concrete, were faced not only with local travertine, but also with marble: “I inherited a Rome made of clay,” wrote Octavianus Augustus. “I leave it all in marble.” Displayed here is a marble slab with a relief design composed of laurel garlands and bucrania. The slab is a fragment of either an altar or a temple wall. In the horizontal cases are some Roman intaglios and cameos of the first three centuries A.D. with representations of the emperor and members of his family, and also of mythological scenes.

Room 129. By the window is displayed a large third century mosaic made of smalt and coloured stone, which in the past paved the floor of the thermae containing public baths and all kinds of rooms used for the recreation of the body and the mind. It illustrates the Greek myth of the youth Hylas, a companion of Jason, who, while the Argo was at anchor, went to a spring for water and was carried to the bottom by nymphs. Upon wall-brackets are fragments of mosaics which also decorated floors in the past.

Representing the work of the Roman crafts are articles made of glass, bronzes and ceramics, displayed in cabinets. In the first century B.C. Roman craftsmen mastered the production of blown glass, and this became a regular feature of everyday life (see the vessels for wine, fragrant oil and rouge, and the cinerary urns). Coloured glass was particularly highly valued. Roman ceramic vessels were made in red lacquer technique, with a delicate relief design produced by means of stamping. The red-lacquer vessels are notable for their perfection of form, many of them made so as to resemble metal vessels – see the small jug with a vine pattern.

Room 128. Roman art and everyday life. Individual exhibits introduce to us the architectural decoration of Roman buildings, among them fragments of murals from Pompeii, the marble capitals of columns, and an ornamental relief. In the horizontal cases by the windows are household articles, working tools and relics of writing. In the centre of the room is the Kolyvan vase (see the description on page 33).

Room 107. Roman sculpture, late 1st -early 4th centuries A.D. The enormous statue of Jupiter, 3.47 metres high (11 ft. 4.2 in.), is an example of the monumental temple sculpture of the mid-first century; it was found in the country villa of the emperor Domitian. The figure of Jupiter is made of marble, and the clothing originally of gilded wood, but during restoration work this was replaced by plaster. In the past, gilt not only covered the surfaces of the raiments and other attributes, but also the locks of hair and the beard. Typical of Roman art is the portrayal of a Roman in a toga, the orator with his arm outstretched addressing the people. One of the Hermitage pieces (No. 173) is an example of this type of sculpture. In Roman art the narrative relief was widespread, including the depiction of military campaigns, battles, triumphal processions and mythological tales. Of this type there are the reliefs on marble sarcophagi dating from the second and third centuries A.D. One of them is decorated with scenes from the Greek tragedy Hyppolytas, another with stories of the Trojan war, and the relief on the third sarcophagus reproduces the ritual of a Roman wedding.

An important place in the exhibition is occupied by Roman portraiture, the apogee of which came in the second and third centuries A.D. Among the masterpieces of the Hermitage collection we should first of all mention the portrait of an unknown Roman (No. 187), the portrait of a youth (No. 213), the head of a Syrian woman (No. 205), the portraits of the emperors Lucius Verus, Philip the Arab, Balbinus and the empress Salonina, and the portrait of a Roman woman (No. 223). The Roman sculptors of the second and third centuries, not confining themselves to a realistic representation of man’s external appearance, strove to reveal his inner world. They were in fact the originators of the psychological portrait.

In room 106 are displayed some large heads, fragments of colossal statues, representing captive Dacians with their hands bound, which adorned the forum of Trajan in Rome. The Roman Empire waged a continuous war of conquest, and such triumphal monuments were supposed to confirm in the minds of the people the invincibility of Roman military strength. 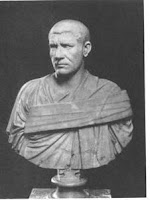 Portrait of Emperor Philip the Arab

Room 105. The exhibition acquainting the visitor with the art of antiquity ends with a look at some copies of parts of the large frieze of the Altar of Pergamum, which portrays the gods fighting with the giants. The altar, in honour of Jupiter, was erected in the second century B.C. in the capital of the kingdom of Pergamum (present-day Turkey) to commemorate its victories over the Gauls. The original, discovered in the nineteenth century by the German research scholar Karl Humann, was kept in the Berlin museum and rescued during the Second World War by Soviet soldiers. In the post-war years it was kept in the Hermitage, where a copy was made, in the same size as the original, and put on display. On the marble band of the frieze – 120 metres long (393 ft. 8 in.) and 2.3 metres high (7 ft. 6.5 in.)- there are more than one hundred figures in various poses. The frieze of the Altar of Pergamum is the finest of the originals of Greek monumental sculpture that have come down to us.

The art and culture of ancient towns on the northern Black sea coastlands (700 B.C.-3rd century A.D.)

In 1830 soldiers digging stone on the steppe near Kerch by chance came across, beneath the Kul-Oba burial-mound (Tartar "Hill of Ashes"), a grave dating from the fourth century B.C. containing many valuable objects, among them a large number of gold articles of Greek origin.

The art of the archaic and early classical periods, 800-450 B.C. The oldest examples of Greek art in the exhibition are some ninth - eighth century clay vessels with geometric patterns painted in black or reddish brown pigment.

The department of the art and culture of antiquity

The relics in the Hermitage of the culture of classical antiquity include a very rich collection of vases, carved stones, jewellery and terra-cotta, a rare collection of Roman portrait busts, and examples of Greek sculpture.