The Hermitage collection of Spanish painting is one of the richest and most significant in the world. Among the sixteenth century paintings two works by Luis de Morales (1509-1586), Mater Dolorosa and Virgin and Child, attract considerable attention.

There is grimness and tragedy in the mournful, deliberately elongated faces of the Virgins, while, as regards the colours, black-green and cold pink tones are predominant. To some extent the work of Morales reflected the religious, mystical mood of Spanish society created by the Catholic church, in those times extremely powerful in Spain. This fact was responsible for the continued prevalence of religious subjects in Spanish art.

One of the gems of the Hermitage collection is The Apostles Peter and Paul, painted between 1587 and 1592 by Domenikos The-otokopoulos (1541-1614), called El Greco on account of his Greek origin. In this work the artist portrays two complex characters, two conflicting natures. The expression on the face of Peter, the meek look in his dark, lustreless eyes, the slightly bowed figure, and the hand sagging beneath the weight of the key all reveal a contemplative, passive nature inclined to meditation and doubt. Paul is represented as a powerful, resolute personage; he has the high brow of a thinker, the feverishly fiery eyes of a fanatic, and his hand is resting authoritatively on the book. The inner tension of the figures, the disturbed folds of their robes, and the rich, glowing colours create an atmosphere of anxiety and spiritual exultation so characteristic of El Greco. The subsequent development of Spanish painting was determined by the very close connections with folk traditions. The pupils of El Greco, for example Juan Bautista del Maino (1578-1649), in whose painting the Adoration of the Shepherds is clearly felt the desire to record the simple observations of life, based their art upon a quest for realism. One of the leading Spanish artists of the late sixteenth and early seventeenth centuries was Francisco Ribalta (1551/58-1628), whose work is represented by the earliest of his dated paintings, Raising of the Cross, and a portrait of the great Spanish dramatist Lope de Vega. Portrait painting, for a long time the only form of the secular genre in Spain, is also represented by two portraits by Juan Pantoja de la Cruz (1551-1609). 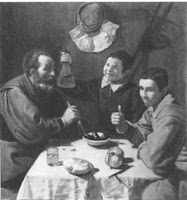 There are two paintings in the Hermitage by Diego de Silva Velazquez (1599-1660), one of the great masters of the past. From his early period there is Luncheon (c. 1617), which portrays an old man and two youths talking cheerfully and sitting in natural, relaxed postures at a scantily laid table. In the figures of these common people certain features of the Spanish national character are subtly observed – gaiety and restraint, open generosity and a certain severity. The still life is wonderfully painted; it consists of a glass containing golden wine, a herring in an earthenware dish, a pomegranate, a turnip and a knife. The objects cast a slight shadow on the table, which is covered with a white cloth.

Much of Velazquez’s work was devoted to portrait painting. The Portrait of Count Ollvares (c. 1638) is from the outside laconic, but contains deep characterization. The plump, coarse face, the savage look in the dark eyes, and the sensual smile reveal some peculiarities of the imperious and powerful statesman, the confidant and minister of Philip IV. Velazquez’s genius as a painter is clearly seen in the bold contours of the face, in the subtle rendering of shades in the black velvet of the cloak, and in the silvery, transparent air and light. Also in this room are paintings by pupils of Velazquez – Juan Mazo’s Portrait of Philip IV and Juan Pareja’s Portrait-of the Commander of the Order of Santiago de Compostela – and by followers of his, Antonio Puga (The Grinder) and Antonio Pereda (Still Life).

Note also the work of Velazquez’s elder contemporary Jose Ribera (1591-1652). His paintings St Jerome Listening to the Sound of the Trumpet and St Sebastian and St Irene are remarkable for the intense emotional quality of the figures, the saturation of colour, and the unusual use of light and shade. The monumental canvas by Francisco de Zurbaran (c. 1598-1604) entitled St Lawrence portrays one of the first deacons of the church, who suffered martyrdom by being broiled on a gridiron which he is represented in art as holding in his hand. Thickset, and with a simple but inspired face, St Lawrence recalls to mind the heroes of Spanish folk tales. The figure of the saint, in a heavy velvet vestment embroidered with gold, appears especially expressive set against the background of a serene landscape with a low horizon. The other of Zurbaran’s paintings, Girlhood of the Virgin, is captivating for its sincerity and warmth of feeling. It depicts a small, tender young girl with her needlework on her lap. 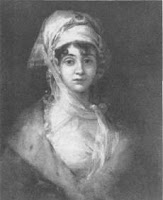 The work of Murillo (1618-1682), a younger contemporary of Velazquez and Zurbaran, is illustrated by twelve paintings. Murillo’s canvases on religious subjects – Isaac Blessing Jacob, The Rest on the Flight Into Egypt and The Assumption – are notable for the freeness of composition, the attractive representation of the figures of women and children, and the beautiful range of colours. The Boy with a Dog is an example of genre painting, often practised by Murillo and in which his talent as a realist painter is clearly seen. The early nineteenth century art in Spain is represented by the Portrait of the Actress Antonla Zarate by Francisco de Goya (1746- 1828). The etchings of this great master are displayed in table-cases.

Much of the work of the eminent realist painter Albert Edelfelt (1854-1905) is based upon themes associated with the life of the Finnish people and his native countryside (The Laundresses, Pines in Borga, Fishermen at Sea).

Art of the Netherlands (15th-16th centuries)

In the fifteenth and sixteenth centuries the Netherlands, like Italy an advanced European country, experienced the Renaissance.

The small but valuable collection in the Hermitage enables us to trace the major lines of development in English art, which reached its highest peak in the eighteenth century.